“She sacrificed her entire life for me. I can never repay her for that.  It's often hard for me to stand up here and make other people understand how much our spouses sacrifice.  You don't understand. You don't understand everything that they do every day in order to make us a better Army. I don't believe there's any other profession (where) we count on our spouses to do so many things.”

Our time in Lorida gave our family the opportunity to focus on each other while enjoying a professional hunting lodge experience.  It was truly remarkable to see my son Zac’s smiling face and authentic enjoyment when we shot our boar together, my youngest daughter Isabelle’s intriguing expressions as we dressed the hog with our guide Brian, and the confident smile my daughter Abigail had when riding her first horse.  Danny and Carla also blessed Amy with a facial and full body massage, an opportunity for her to take some much needed time to herself to relax and recharge.

Thank you for your contributions to the Sportsman’s Foundation.  They understand that military life is more than one individual, but part of a network with the most fundamental element being our families.
Thank you,
Dave Rowland

Dear TBD
Amy and I would like to express our sincere gratitude for your sponsorship of the Sportsman’s Foundation for Military Families.  We were fortunate to visit the Lorida property with our four children this past August.

Danny and Carla were exceptional hosts, whose vision for helping veterans connect with their families is unmatched.  They understand that the military life involves not only the service member but also encompasses a network of friends and, most importantly, their family.  My wife and children, like many military families, frequently handle the stress and burden that the military life entails by enduring long stretches of time when I am away from home, including both training and combat deployments.  I think General Odierno, the retired Army Chief of Staff, said it best during his retirement speech about his wife: 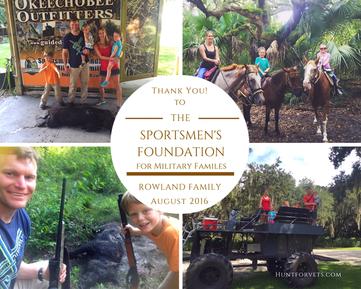 REVIEW FOR THE SPORTSMAN'S FOUNDATION for Military Families 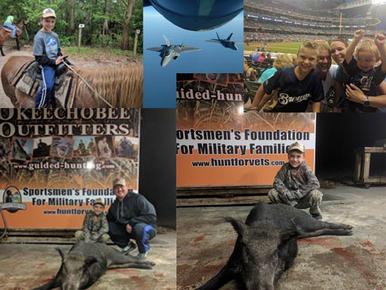 Good Morning Everyone -
First of all, I know that you all are very busy people.  This email is a little longer with background information, and our story.  If you are too busy to read all of it, just know this.  I can not say thank you enough to what you have done for me, my son, and my family.  I thank you from the bottom of my heart.  You are amazing people, and truly made a world of difference in our lives.  I have attached some photos I thought you might like.  Now for our story.
Approximately one year ago I applied to participate in a hunt with Okeechobee Outfitters through the Hunt for Vets program.  I was selected and instantly excitement began building in thoughts of spending some quality time with my son in the woods.  My son, William, is 10 years old, and has been having some troubles lately because of my commitment to our great country.